We are Japanese if you please……

Posted on December 11, 2013 by shayhealyblog 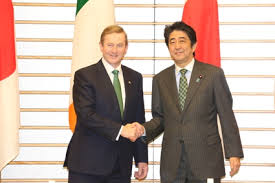 Luckily Big Phil Hogan had no reason to be on Enda Kenny’s trade mission to Japan. Had big Phil come bursting through the door, his heft might have alarmed the locals into thinking Godzilla had been hired, at a six figure sum, as advisor to the Irish government on monstrous behaviour, such as paying an ex- civil servants and ex-Taoisigh exorbitant pensions.

It must have been pure pleasure for the Taoiseach to be so far away from such a dreadful mess, back home, where some of the country’s most prominent citizens have been caught feathering their nests, from the public and private purse.

Add in the five glorious days where he met many people who shared his eye-level, with the exception of Peter Robinson, who is tall-ish. Where does Peter Robinson fit into all this? Well, Peter, the Northern Ireland 1st Minister, and Deputy 1st Minister, Martin McGuinness were in Japan at the same time as our boys, Enda, the Napoleon of Castlebar and Future King, Simon Coveney.

Thrown together with a Shinner for a couple of hours a day at Stormont, might be bearable for any Unionist politician, but the flight to Japan alone, takes 13 hours! Did Peter and Martin sit side by side? Was one in front of the other? Did they watch the same movies and exchange reviews?

Did anybody see Peter and Enda share a car?

And if so, did they notice which of the two leaders got in first. We seldom hear the minutiae, but there is one bit of Japanese etiquette, which can immediately tell, which of the two, Enda or Peter, would have been considered the more important?

Who sits where, is very significant in Japan. The most important passenger sits behind the driver, presumably because in the event of a collision, it is anticipated the driver will take the brunt of the impact.  Once the supremo is comfortable, the pecking order then applies to everybody else travelling in the car.

So, does anyone know who sat in first, Peter or Martin?

Mind you, there must be some sort of relationship between Peter and Enda. Jointly and they are to be commended for their laudable frugality, by having an official meeting on the Irish question, whilst in Japan. This was a freebie. There would be one less meeting between North and South to be paid for by the taxpayer, two less set of expenses to be vouched for, because two statesmen, over some sushi and sake (perhaps), thrashed out, in the Land of The Rising Sun, the future of the divided Island of Snakes and Squalor.

The only casual public information in Ireland on things Japanese, is the publicity surrounding the fabulous Japanese Gardens at The National Stud. Devised by Colonel William Hall Walker, a wealthy Scotsman from a famous brewing family, the gardens were laid out by Japanese master horticulturist Tassa Eida and his son Minoru. Their aim was, through trees, plants, flowers, lawns, rocks and water, to symbolise the “Life of Man.”

Eida’s work traces the journey of a soul from oblivion to eternity and portrays the human experience of its embodiment, as it journeys by paths of its own choice, through life birth, childhood, marriage, parenthood, old age, pensions and top-ups for all wealthy executives. (I added the last two).

Japan is one of the few places where there is an anomalously small Irish presence. The only “Irish”figure of note, so far, is writer, Patrick Lafcadio Hearn, who was born on the Greek Island of Lefkada. His father, Sergeant Major Charles Bush Hearn married Rosa Antoniou Kassimati, from a noble Greek family. When their first child was born, they christened him Patricio Lafcadio Hearn. When he was two, the family relocated to Rathmines, but his father’s marriage, in a Greek Orthodox Church, didn’t go down well with the Irish Protestant relatives, who considered Lefcadio born out of wedlock.

Lafcadio was noted for his writings on New Orleans and it was as a newspaper correspondent that he arrived in Japan in 1890. Four years later, he wrote Glimpses of Unfamiliar Japan, which gave people a first-hand account of Japan behind the veil. He married a Japanese woman and took for himself the Japanese name, Koizumi Yakumo and they had four children.

In the late 19th century, Japan was mysterious and exotic but an international exhibition in Paris in 1900 made Japan very fashionable and Hearn finally finally got a bit of recognition for his writings. He even made it into popular culture. In the film of Ian Fleming’s 1964 novel, You Only Live Twice, the villain, Blofeld quizzes James Bond.

“Mr. Bond, have you ever heard the Japanese expression, “kirisute gomen?”

Lafcadio was just 54, when he died of heart failure. It took until 2002 before another famous Irishman emerged in Japan. That’s the year Robbie Keane cracked an equaliser past the German goalkeeper in the 92nd minute of their World Cup tie in Yokohama Stadium.

Shay Healy is a multi-media artist from Dublin Ireland, who has been in the music business all his life. His song “What’s Another Year”sung by Johnny Logan won the 1980 Eurovision Song Contest. He has written two musicals, The Knowledge and The Wiremen. As a television host, Shay is famous for a cult chat show, Nighthawks and on the other side of the camera, he has made over 12 documentary films, including “The Rocker-A Portrait of Phil Lynott” ,“First Lady”-A Portrait of Tammy Wynette ” and “Roy Rogers-King of The Cowboys. The Danny Boy Triangle (3 Books in 1) is now available to buy on Amazon
View all posts by shayhealyblog →
This entry was posted in News, People & Blogs, Politics, Sport and tagged Enda Kenny, Lafcadio Hearn, Martin McGuinness, Peter Robinson, shay healy, Simon Coveney, The Danny Boy Triangle, The Irish Daily Mail. Bookmark the permalink.